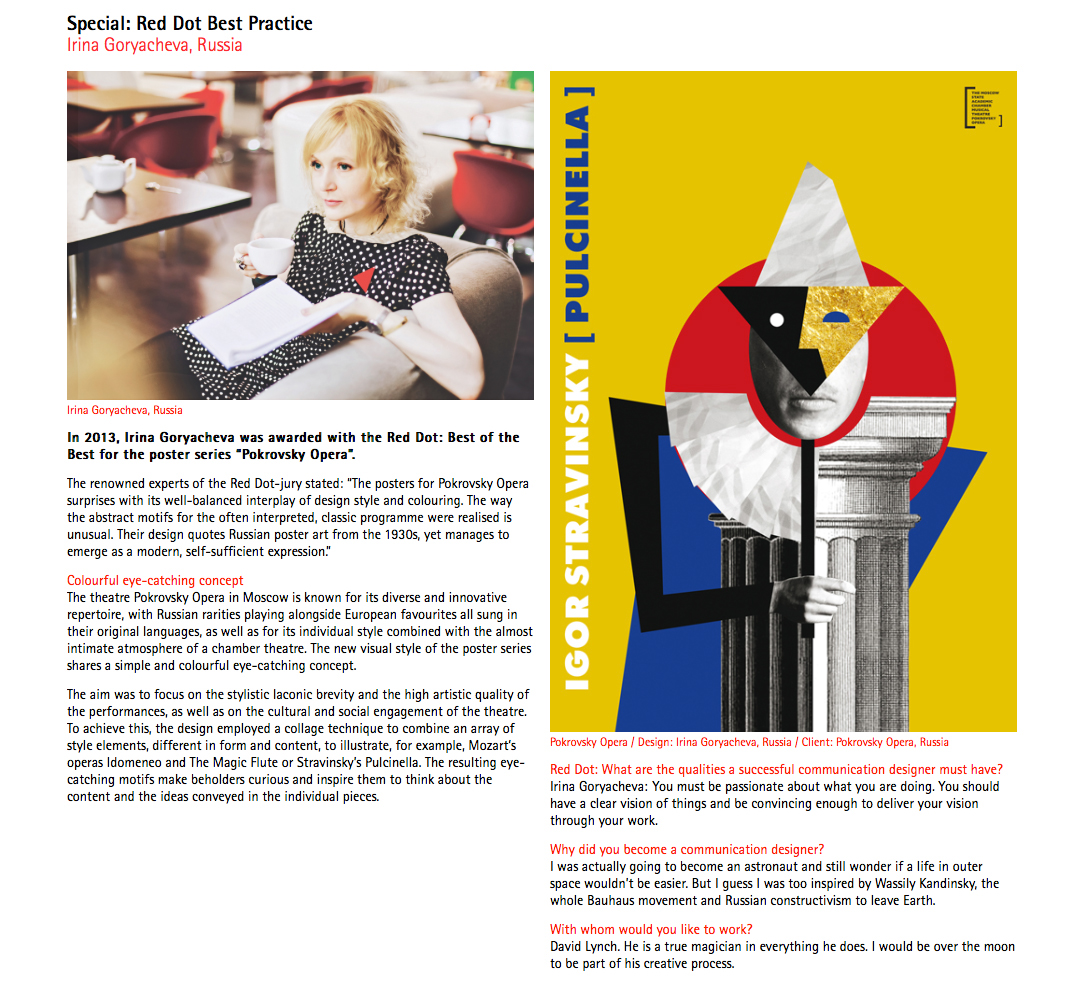 In 2013, Irina Goryacheva was awarded with the Red Dot: Best of the Best for the poster series "Pokrovsky Opera".

The renowned experts of the Red Dot-jury stated: "The posters for Pokrovsky Opera surprises with its well-balanced interplay of design style and colouring. The way the abstract motifs for the often interpreted, classic programme were realised is unusual. Their design quotes Russian poster art from the 1930s, yet manages to emerge as a modern, self-sufficient expression."

Colourful eye-catching concept. The theatre Pokrovsky Opera in Moscow is known for its diverse and innovative repertoire, with Russian rarities playing alongside European favourites all sung in their original languages, as well as for its individual style combined with the almost intimate atmosphere of a chamber theatre. The new visual style of the poster series shares a simple and colourful eye-catching concept.

The aim was to focus on the stylistic laconic brevity and the high artistic quality of the performances, as well as on the cultural and social engagement of the theatre. To achieve this, the design employed a collage technique to combine an array of style elements, different in form and content, to illustrate, for example, Mozart's operas Idomeneo and The Magic Flute or Stravinsky's Pulcinella. The resulting eye-catching motifs make beholders curious and inspire them to think about the content and the ideas conveyed in the individual pieces.

Red Dot: What are the qualities a successful communication designer must have?
Irina Goryacheva: You must be passionate about what you are doing. You should have a clear vision of things and be convincing enough to deliver your vision through your work.

RD: Why did you become a communication designer?
IG: I was actually going to become an astronaut and still wonder if a life in outer space wouldn't be easier. But I guess I was too inspired by Wassily Kandinsky, the whole Bauhaus movement and Russian constructivism to leave Earth.

RD:With whom would you like to work?
IG:David Lynch. He is a true magician in everything he does. I would be over the moon to be part of his creative process.